The theme of the Cavalcade launched this month by Sophie immediately echoed me. As you may have read in the title, the theme is the little unusual stories with animals (the theme is this way: here).

This is our third participation in the Cavalcade: If you do not know what it is (here). Coralie and myself have made you discover in the previous 2 editions, My Dream Horse and the meeting that marked my life, that we invite you to read if it is not already done;).

Come to the theme,

You have to know that in my daily in addition to having mermaid I also have a cat. (which you have already probably seen if you follow us on social networks)

I'm not going to tell you a cute story about an animal that takes care of another despite their differences.  Simply because this is not the case with my anecdotes. I didn't want to write you a long romance text to illustrate "nonsense", it will be just anecdotes.
I'm lucky (I'm not always sure it's a chance) to have 2 freaks. I have two girls who are both a little crazy (I love them anyway)

The 2 are strange and sometimes have behaviors that are difficult to explain.

My cat, the craziest of the 2: Mira-Jane (nod to Manga Fairy tail, it's a cute character who can turn into a demon. You have the idea in mind: My cat is the same. 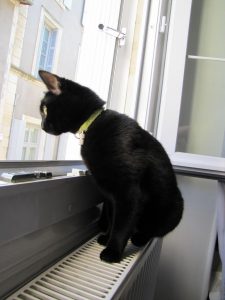 Besides all the normal nonsense that a cat would do, yes because it makes a lot (how can a little cat do so much crap?) Like his claws on the couch, drop things see if it bounces and jump in the rack… (non-exhaustive list)

She loves to drink water from the toilet, given her size, she fits completely into the bowl.

It rubs the window of the washing machine, even when it is turned off.

She growls when we ring the doorbell.

His favorite toy is the hazelnut (yes yes the small fruit of the hazel). When she loses it, she'll look for another one in the pot where they're stored.

She hides her hazelnuts in handbags and shoes (I feel like I have a squirrel sometimes).

She brought me a piece of sugar as a gift. (like a prey deposited on my knees)

She eats the rest of the asparagus (once peeled) like spaghetti.

She licks the rest of mustard, lemon, horseradish etc… On the plates.

It hangs regularly in front of the TV when it is a horse on the screen. Growing up in a stable leaves a trail.

In short I have a cat, dog, squirrel but I live it well.

You have to know that mermaid is not a completely normal horse… To put my mare in fear of puddles, she never passes in, but pass a Ford or go into the sea (this big puddle yet) no worries.

Under the saddle, she gave me a press because she had seen a horse do it, indeed neither one can do it. Besides I have never been able to do it again.

It recovers the disturbing behaviors of other horses. She was in front of a horse that scratched to get attention, for months she scraped to have to eat (mainly) or to tie when it was too long. She had never done it before.

She loves clementines, really, she crunches it like apples and even if I peel it she'll look for the peelings. 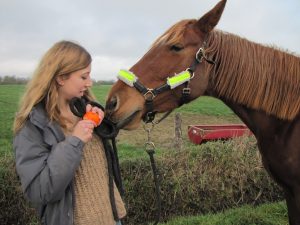 In fact I never really have time to bore with them…